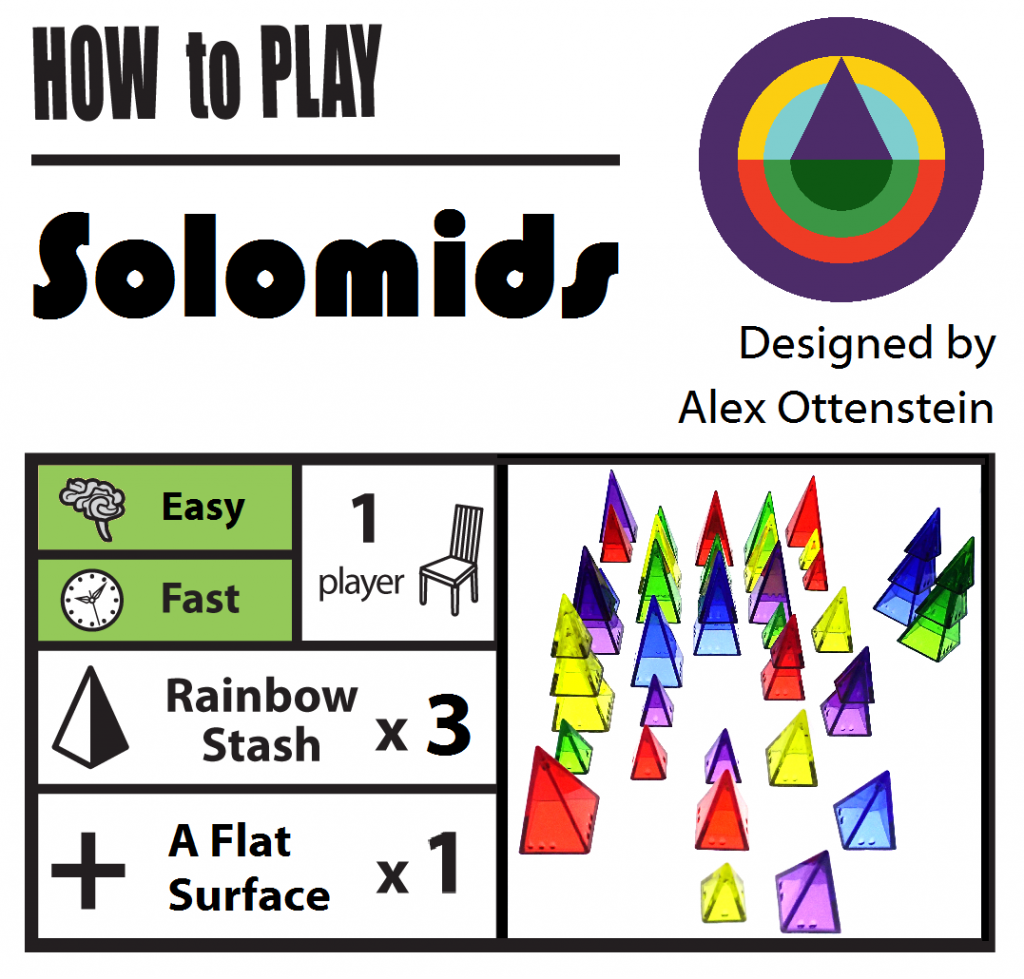 ‘So you’re ready to fly in my forces?’ the Emperor said, sliding a scrambled Solomids setup across the table.  ’First you must prove your pyramidian prowess.  Win without swapping and you shall command an entire cavalry!  A one-swap victory, and you’ll captain your own ship; swap two and it’s off to cadet school for you! But lose…‘

Goal: Build a complete 3House set, by banking one small-medium-large stack of the same color (called a tree or tree-trio) at a time, attempting to form three complete ‘rainbow stashes’ (five tree-trios, one of every color – making 15 pyramids in each rainbow stash).

Setup: Mix a 3House set into a hat, draw one piece at a time, and stand up a left-to-right row of 5 random pieces, leaving enough space beyond it for one more row later.  Add 8 more rows of 5 pieces below the first (for 9 total rows of pyramids), neatly aligned so they also form 5 columns.  This grid of 45 pyramids, along with the ‘invisible’ first row (which should be the farthest from you), creates the playing area of 50 total spaces.  Pieces should not physically touch – using two 5×5 Looney Labs volcano boards stacked one above the other works incredibly well as a playing surface, however a plain table is fine too.  HERE is a board designed by Mike Smith ©2017.  When setting up, follow these two rules:

Lastly, establish an area off to the side that functions to hold completed tree-trios, known as the bank.

Gameplay: There are three ways to move pieces in the playing area – Stacking, Sliding, and Swapping.

Stacking: Attempt to form tree-trios by moving pieces forwards-backwards-left-or-right to stack smaller pieces on top of the next size larger, if of the same color.  Stacked small-medium combos can be further stacked on top of a large piece of the same color, forming a tree-trio.  As pieces get stacked, gaps will form on the board, and you may always move across open gaps of any size (in any one direction) to stack, but may never jump over other pieces.

Once stacked, pieces cannot be unstacked, however if a small-medium stack of any color is across/next to a medium-large stack of the same color, the small piece can be moved to the top of the medium-large combo to form a trio.  The same is true for a medium-large stack across from/next to a single large piece – the medium piece can be moved to the other large piece of like color.  Note this also means you may move small or small-medium combos off of completed trees still in play, provided you have the proper color and size piece available adjacently, but you can never:

Sliding: Strictly viewing the playing area as five columns, at any time, you may close any column gap by sliding the next piece after the gap, and any pieces that are consecutively ‘touching’ behind it, forwards (away from you) until they reach the piece at the front of the gap.  Gaps can never be closed by moving pieces left, right, backwards or diagonally, and pieces further back in the same column that are separated by more gaps do not move at all unless you choose to slide them in a separate move.  The ‘invisible’ first row is available at any time as an extra space to slide pieces into.

Swapping: Besides stacking and sliding, the only other type of movement is the swap, where you trade the piece(s) in any one occupied space with the piece(s) of any other occupied space in play.  You do not start the game with any swaps, but can earn up to two by banking rainbow stashes, as described next.

Banking: If you are able to form a tree-trio, at any time you may remove it from the playing area and add it to the bank, though it’s not always wise to immediately do so.  Once you have built up a complete rainbow stash (five tree-trios, one of every color) in the banking area, you earn one swap which you may use at any time.  With three rainbow stashes in the game, there are a maximum of two attainable swaps, so use them wisely.  Note that tree-trios never need to be banked until the player chooses to do so, and any pieces that have been banked cannot be returned to the playing field.

Endgame: If three rainbow stashes have been deposited into the bank, forming a perfect 3house set, you win!  If at any time you cannot stack, slide or swap, the game is over. 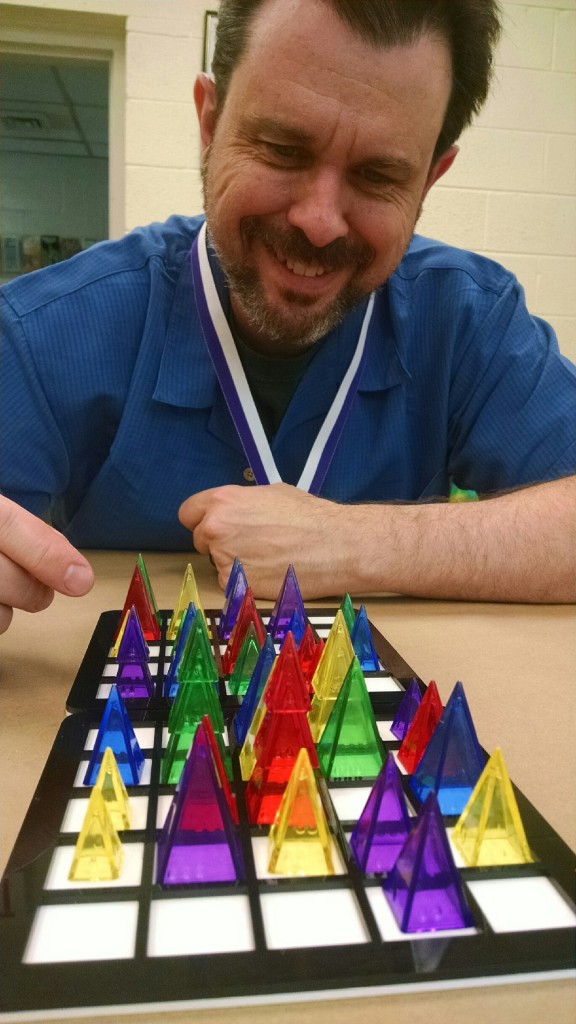 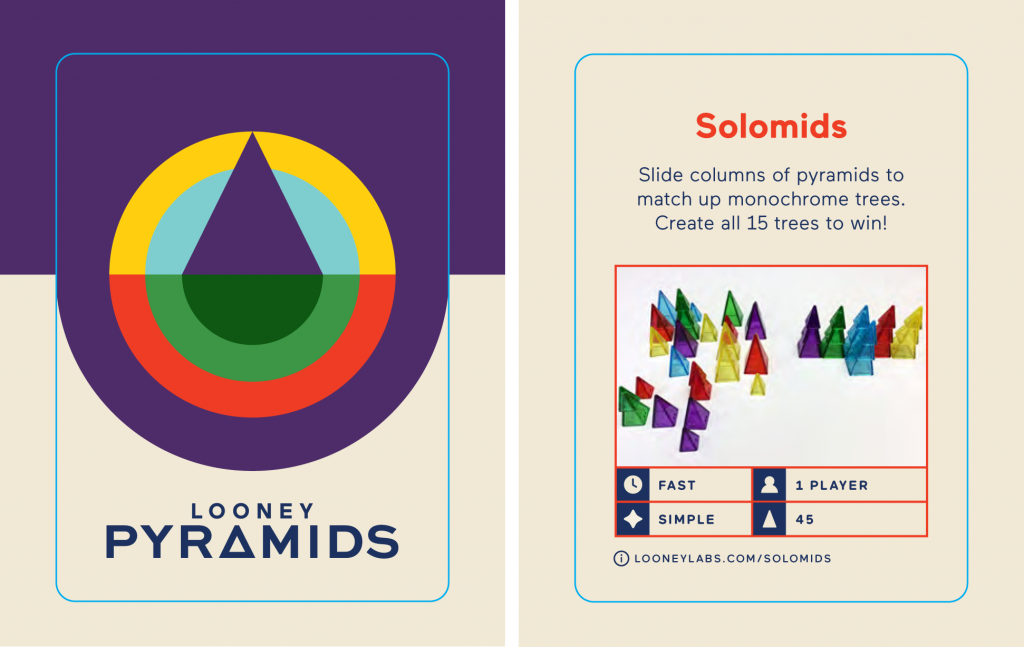 Solomids is one of the 12 bonus games from the Pyramid Arcade kickstarter.

You can find the other 11 games HERE and the bonus card shown above for sale HERE. 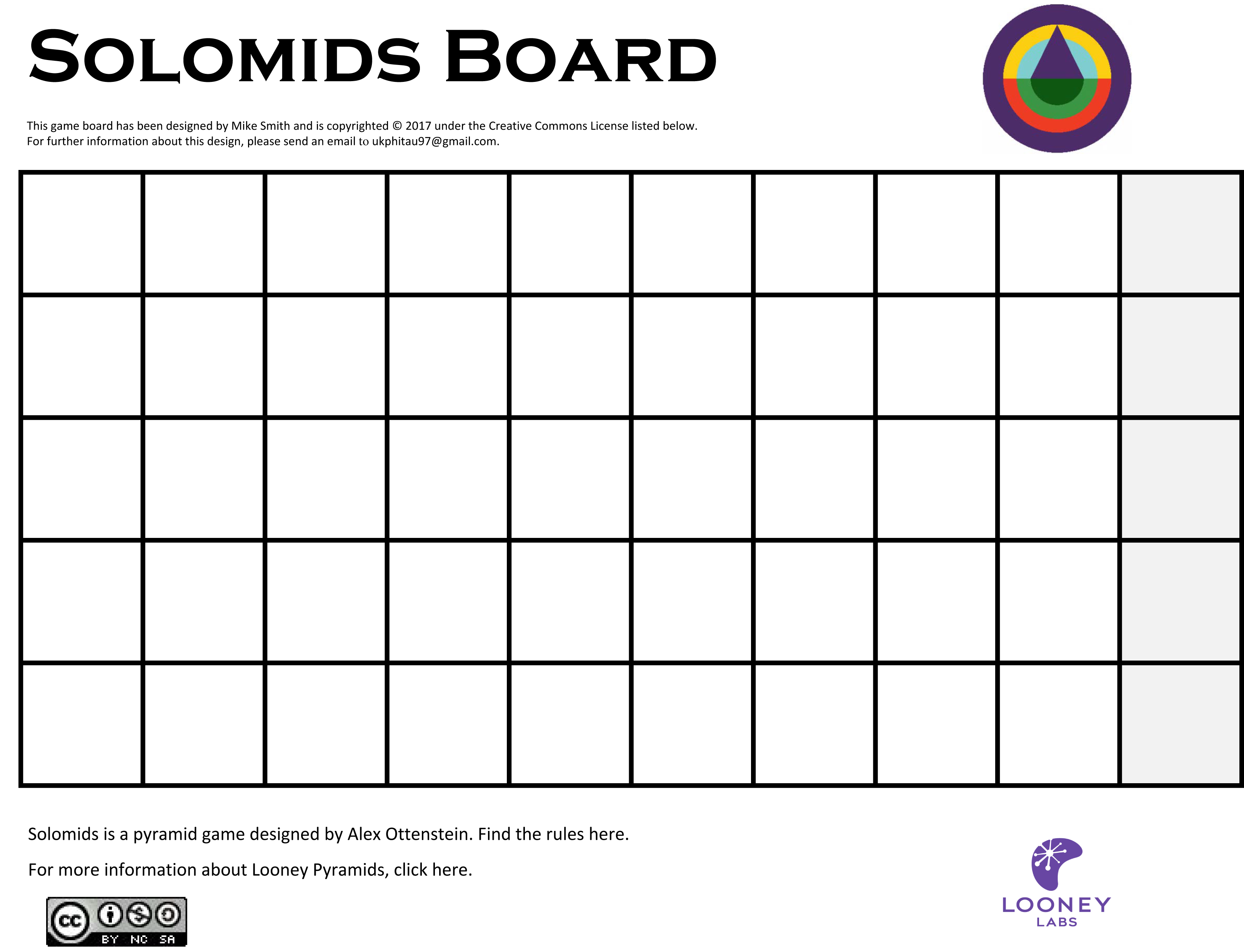